Remember what I said about hard disc drives being better? Me neither. It took a little less than 2 days to move over 2.7 TB worth of PLEX TV Show content to a single WD Red drive(and sort).

Transcoding : Decided to start transcoding to memory. There is plenty and is rarely highly utilized.

Time to get a new drive. I feel like I got my money worth. A 6TB Western Digital HDD, used 24/7/365, for a PLEX media server, lasted... dun dun dun..... 7 years!. This time around I am going to split up the media libraries, by category, and spread them across multiple drives.

I opted for two Western Digital RED NAS 4tb drives because i'm cheap!... and I love WD drives..... I hardly ever have an issue with their storage hardware and it's always easy to replace under warranty. I HIGHLY recommended WD for their outstanding customer service (..just like Corsair). Why not SSDs instead? Do you remember when I said i'm cheap? Well, that wasn't the only reason. My PLEX server has approximately 10 VERY ACTIVE users meaning there will be A LOT of R/W going on. Currently, cost effective ssds are not built for that. If you shell out another $100/ea per TB then what I said doesn't matter. 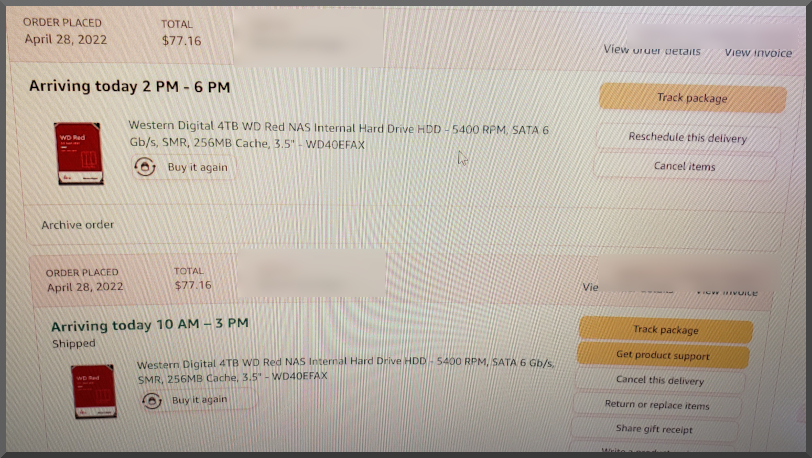 Hopefuly they will come in today. Maybe i'll be able to make a video of the install, partioniong, file system creation, and library stuffs. Maybe I should consider some of these faster USBs.

Shadowmoon has a new look (left) & the GTX 1050TI. Oh, I updated PLEX media server also. You get the process by now right?

You are currently running version 1.25.6.5577 on the server "shadowmoon". Version 1.25.7.5604 is now available. This update will need to be installed manually after download.

You are currently running version 1.25.5.5492 on the server "shadowmoon". Version 1.25.6.5545 is now available. This update will need to be installed manually after download.

The PSU came in this morning and I was able to get installed in approximately one hour.

You are currently running version 1.25.4.5468 on the server "shadowmoon". Version 1.25.5.5492 is now available. This update will need to be installed manually after download.

I didn't know until today that an old-ish hard disc drive can sound like a old car window starting to seize.

I will, over the next couple weeks, be moving data to a 'stack' of old-ish SSDs (from discarded PCs). I knew they would come in handy someday. Oh yea, some PLEX content will be unavailable until then.

2-9-2022 : It was actually the PSU fan making noise. PSU was only a few years old. I didn't register for warranty while I had proof of purchase available. Lesson learned.

Woke up to IOMMU and SVM disabled.

This morning I woke up and my home automation stuff was inop throughout the home. I came to notice the Hass.io VM wasn't running. None of my VMs were running on Shadowmoon. The kvm command returned 12. I went to investigate the BIOS to start at the ground floor.

10:30am. MSI hypervisor showed IOMMU set tp Auto and SVM disabled. This would be a good reason for VMs being inop on the MSI x470 motherboard. I had both enabled and have not recently rebooted. That seems a little odd. Upon reboot all VM are working as they should. I will need to (re)configure memory speed also it seems like.

You are currently running version 1.25.4.5426 on the server "shadowmoon". Version 1.25.4.5468 is now available. This update will need to be installed manually after download.

I honestly didn't see this moment coming in 2021 simply because it really didn't matter [to me] much. It was very interesting to find that my home PLEX server, Shadow Moon, has a less difficult time streaming 4K movies when the media/storage is mounted via Samba vs an attached SSD. That might be worth researching for more bottlenecks.

I need to compare apples to apples. The above comparison in hindsight did not take into consideration transcoding of audio. Two different devices were used. Home surround sound 5.1 vs laptop. I will dig deeper on this. I'm glad 4K wifi streaming works period. I just have a need to know which is better IF possible.

1-7-22 : I don't really care which is faster and I have work to do. It works. Fstab updated to //192.168.1.229/plex /mnt/smb_plex cifs credentials=/root/.smbcreds to automount drive on boot and avoid any file conflict issues with PLEX should I choose to make this a long term option.

I probably should have specified a while ago that I enable the Plex Beta Release channel feature on the server since creation. The public release doesn't require as many updates.

You are currently running version 1.25.0.5282 on the server "shadowmoon". Version 1.25.1.5286 is now available. This update will need to be installed manually after download.

You are currently running version 1.25.0.5220 on the server "shadowmoon". Version 1.25.0.5246 is now available. This update will need to be installed manually after download.

Recently my AMD FX black cpu wasn't cutting it for Plex and other home LAN services. I was finally able to 'upgrade'. The best part is the fact that the liquid cooler from the FX series bolts right up to a AM4 chipset. I researched this build for approximately 1 month in advance.

After a hour of fidd'lin around I was able to dial in my overclock to maximize the memory speed. For some reason when I build a pc, 7/10 times, a monitor ends up on the floor 'test bench'.

Room temperatures are noticibly lower considering not much was swapped (cpu,mobo,ram).

I'm extremely grateful to be able to continue learning through personal experience. Financially and physically.

Okay, so I couldn't just let this 8 core cpu and motherboard just sit on the shelf. I, for the most part, finished assembling the box. I was able to use the Ryzen AM4 stock cooler from the Ryzen 5 on the FX8. I am going to use this as my 'web dev' env server and VM playground host. Named 'Bolt' by my son.

The last update was a little wonky so I waited a little bit before detailing here.

Debating on piecing together a cluster for the plex server. Only thing I need to figure out if how to hw offload transcoding (if even possible).

I Ignored all the signs 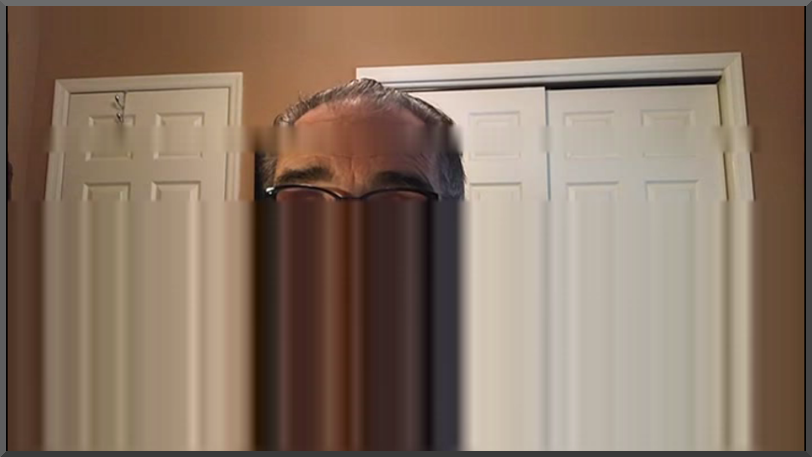 Last night I decided to tackle a small issue I have been having with PLEX Live TV and DVR. I figured it was becuse of poor antenna signal, cable routing, and scanning of channels. An upgraded $20 antenna from Amazon and the Hauppage usb unit were used to rescan. 62 channels found. Wow! Signal on each was at max!

Request received from the LG tv to start playing NBC5 Live TV DVR... and audio/video were distorted. Short version; I'm now at a point where streaming to 2 tablets (at 4k), 1 WAN 1080p, and transcoding LIVE TV is too much for the 8 core and GPU. We knew this day will come. Skipping on Live TV for now when multiple streams are being utilized. 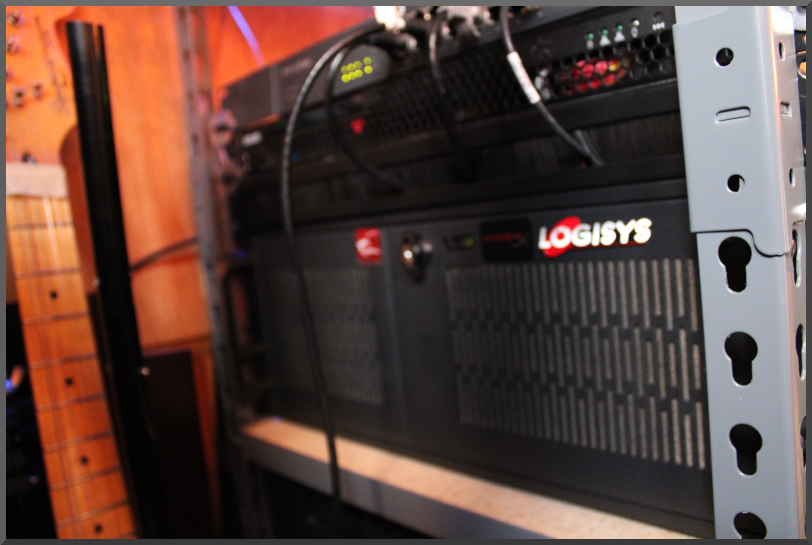 0600: I need to beef this box up while remembering this is a fun homelab OR build a new 4U. Not a money pit. Re👏Spon👏sib👏il👏it👏ies👏!

I love AMD but FX is too old for me. Time to research motherboards. Most likely a refurb x550 will be doable. I'll check what FreeGeek Chicago has

Oh yeah. The family and I moved. Therefore, the office moved. Internal peace. Here I come.🤣 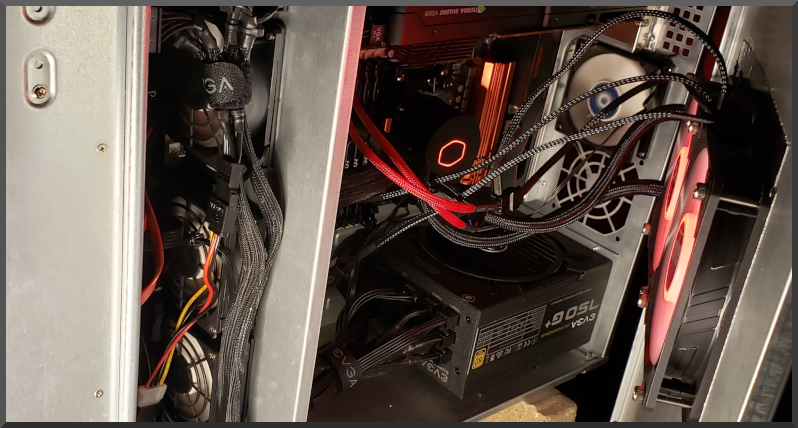 2399; The closet is extremely cooler now and smells better. I guess this will be the new way to go on client builds. Liquid cooled servers as default? I also have the option of housing the radiator INSIDE of the case but did not want to deal with cable management much.

1539; Ended up purchasing a Cooler Master ML240L V2 RGB liquid cpu cooler because what can go wrong does go wrong. This morning I woke to the faint smell of hot metal coming from the server. More expenses. My oldest son said "I can't survive without the server". As expected I had to modify the case and use some custom hardware to make it work...but I got it done. 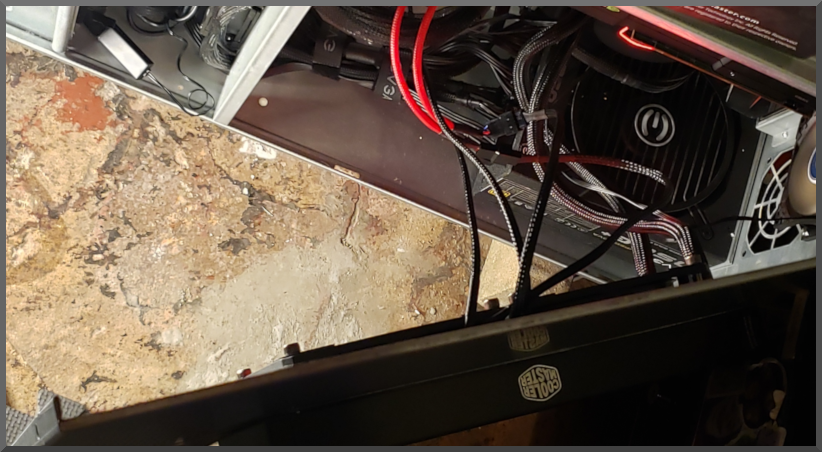 Processor temperatures stay under 38.5 degrees celsius under what is considered full load. 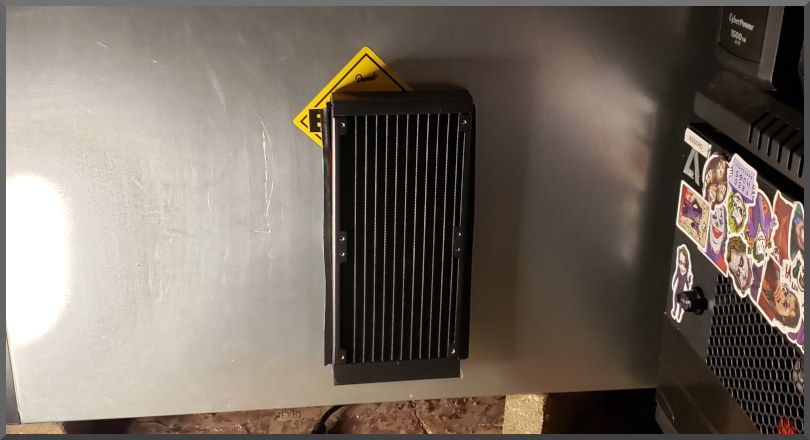 I do not like the idea of fluids in my server but no other air cooler would achieve the same results within the space limitations. 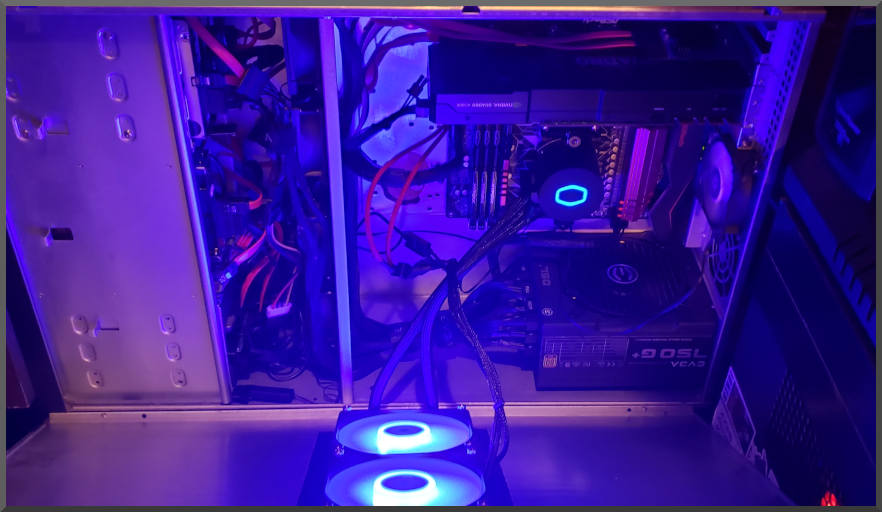 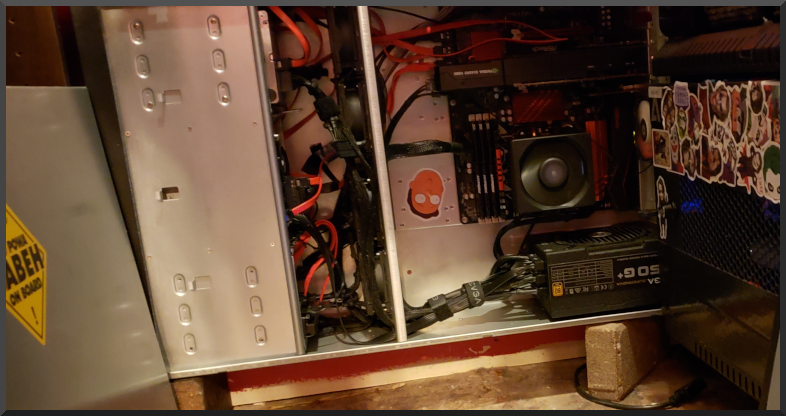 Some heat, some time to think

1400; I started to notice some heat accumulating behind my server and next to my mini rack. It was bound to happen given its current configuration houses 2xSSDs, 6xHDDs, a Nvidia Quadro K5000, and an FX8350. Hopefully I can find a super dirt cheap liquid cooling option given the FX8350 is old-af. For dust-maintenance I typically take the server outdoors and hit it with some compressed air.